Ken Leslie and the Call to Duty

Ken has done only two personal interviews in 30 years, preferring to talk about the programs and the people they serve. We created this bio because people generally want to know who is behind a non-profit.

Ken Leslie, founder of 1Matters.org,  refers to his years of chemical and alcohol addictions that started at age 12, and drove him from the middle class to poverty, to the edge of suicide, and ultimately homeless, living in his car,  as his “party animal” days.

In 1986, he became a stand up comedian – which he now jokes was “professional homelessness” – quickly rising to headliner status after winning regional comedy competitions. “I barely graduated high school. Seriously, I streaked across the stage to grab my diploma.”

While traveling the country, making people laugh, in the late 1980’s he began to see more and more “homeless” landing on the streets of our nation.

After reading a study in early 1990 that documented the fact that 60% of the homeless are families with children, something moved him deeply, very deeply. He knew something needed to be done.

With Harry Chapin, Sir Bob Geldof and John Mellencamp as inspirations and examples of artists who have used their celebrity to bring people together for a cause, Ken brought together his media friends in radio, television and the press along with politicians and the service providers to create the first Homeless Awareness Project Tent City in Toledo in 1990. This was a week-long community-collaboration event for and WITH the homeless. It was designed to get people off the streets, provide services, and prepare the chronically homeless on the streets for winter, provide food, clothing, bonding, and lots of music and entertainment.

The work Ken did with the homeless at Tent City that November made him think there might even be some “good” in him after all. On December 5th, 1990, he literally RAN to Alcoholics Anonymous to quit drugs and alcohol. Sober today, he relates to the unhoused as peers; he’s been there himself.

With the yoke of addiction off his back, he then began the hard work to obtain financial and domestic autonomy for himself.

Ken had gotten into television production in the late 80’s.  Coming off the road, he produced and wrote programs for PBS, including three award-winning documentaries on homelessness: “No House to Hold,” “Homeless Not Hopeless” and “A Home for the Holidays,” as well an Emmy-winning baseball feature with the Detroit Tigers in 1992.

In 1997 he started a successful executive search firm allowing him to become a philanthropist. Most notably he is the founding funder and a founding member of the community COC, the Toledo/Lucas County Homelessness Board (TLC), a collaboration between the City of Toledo, Lucas County, and United Way.

In 2008 HAP became 1Matters after a visit by singer John Mellencamp to their annual event. John was moved by the collaboration and invited all the guests to his concert that evening where he talked with them from the stage. One guest returned to Tent City and said: “Ken: John talked to us from the stage, I guess I really do matter.” 1Matters was born. Mr. Mellencamp and others in the music industry continue to support the organization.

A LONG WAY FROM LIVING HIS CAR

30 years after its inception, Tent City is still going strong, Ken is still sober, running his business and doing comedy or television when the mood or project strikes, including “Called To Duty,” the 2002 Crystal Award of Merit winning documentary about firefighters. As a comic he has shared bills with such acts as DL Hugely, Sinbad, Seinfeld, Sam Kinison, Frankie Valli, the Righteous Brothers and occasionally still headlines regional comedy clubs or the Stranahan Theater.

Because of his unique circumstance, he is a voice for the unhoused from the “inside” – not as an employee in the social service system, rather an objective volunteer, businessman and philanthropist. Sometimes those running the ”system” are uncomfortable with that voice, particularly when it comes to accountability.

Since 1990 Ken has served on every Toledo area homelessness task force and committee. As a member on the TLC Board, he represents the unhoused AND the community’s money at that table, reporting back to both, shining the light of accountability and integrity on a system that sometimes gets dark.

Ken has been recognized in his community including the Jefferson Award winner for Community Service, and the Access to Justice: Community Advocacy Award.

He’s come a long way from the days of living in his car.

Veterans Matter was created as a local program of 1Matters.org to house 35 local veterans. After Dusty Hill of ZZ Top, John Mellencamp and Mitch Albom asked Ken to expand to their home states, along with funds raised by Katy Perry and Kid Rock, the program organically grew nationally. Having to make a choice of one, or the other, at the end of 2015, Ken closed his Executive Search practice to house homeless heroes full time.

Ken sees the “homeless” very differently from most: On the streets he sees them sharing the single sandwich. He sees them coming to Tent City because they want to VOLUNTEER to help the homeless. He sees them giving up something they have to be sure the children in the families are fed and clothed.

He sees them as people who, no matter their circumstances, feel compelled to help their fellow man. In other words, they are you and me. He has been there; he knows. And they know he knows. They say “that brother keep it real.”

What does he think? “I’m just like every other human being on this planet, each day I just try to be and do the best I can be or do, that’s all.”

Gary Bond, a formerly homeless man who now lives in an Old West End home, agreed.   He said, “Street people admire Mr. Leslie for sticking up for them.”

“The community knows his face. He’s [our] friend,” Mr. Bond said. “He has complete credibility. To have earned that trust – I don’t know of anybody else who’s done that. He walks between two worlds.” –  Toledo Blade  2/6/2010 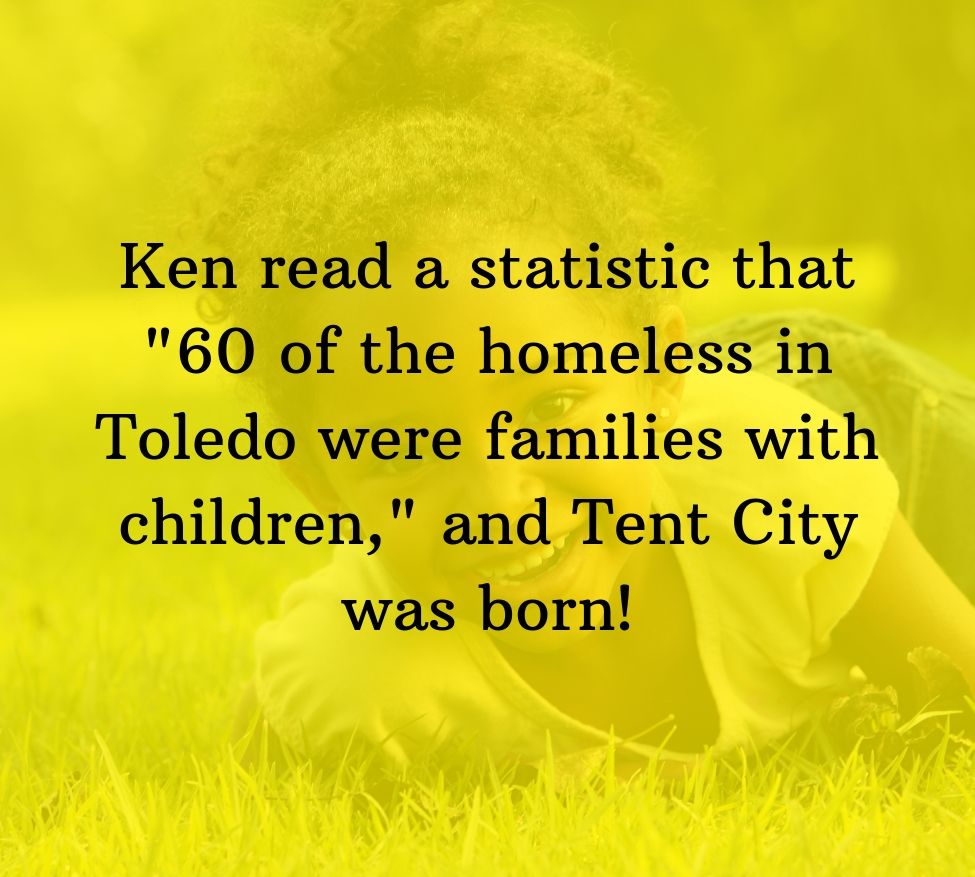 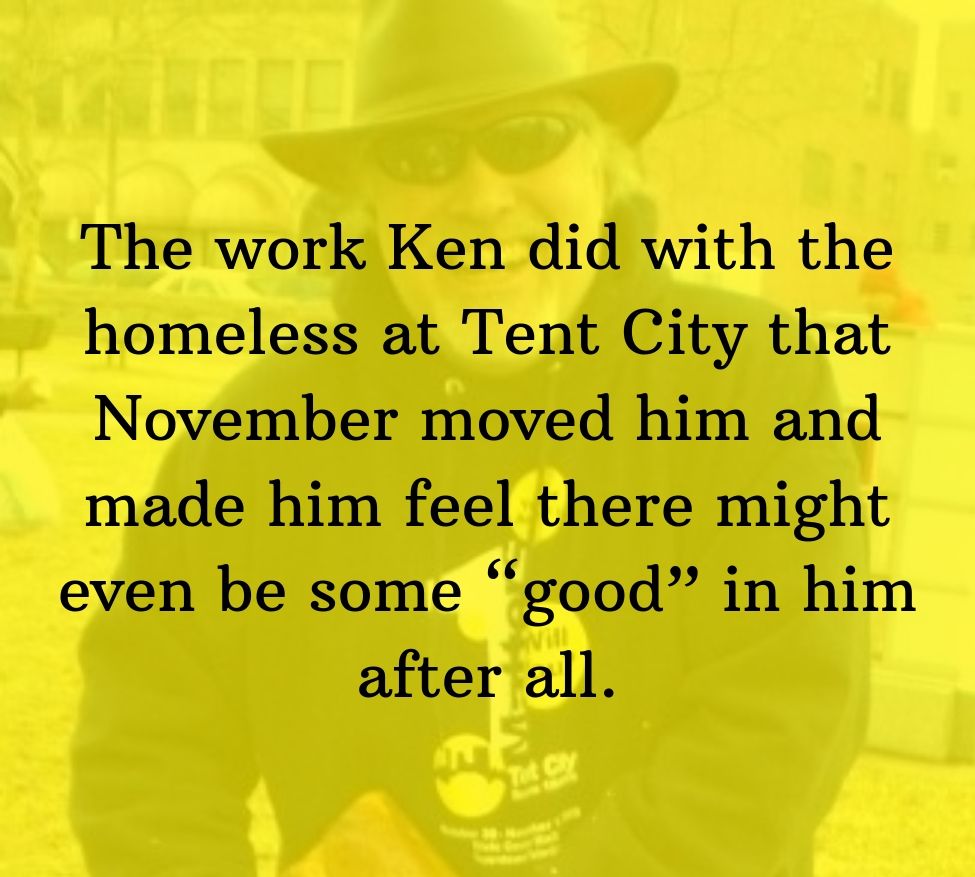 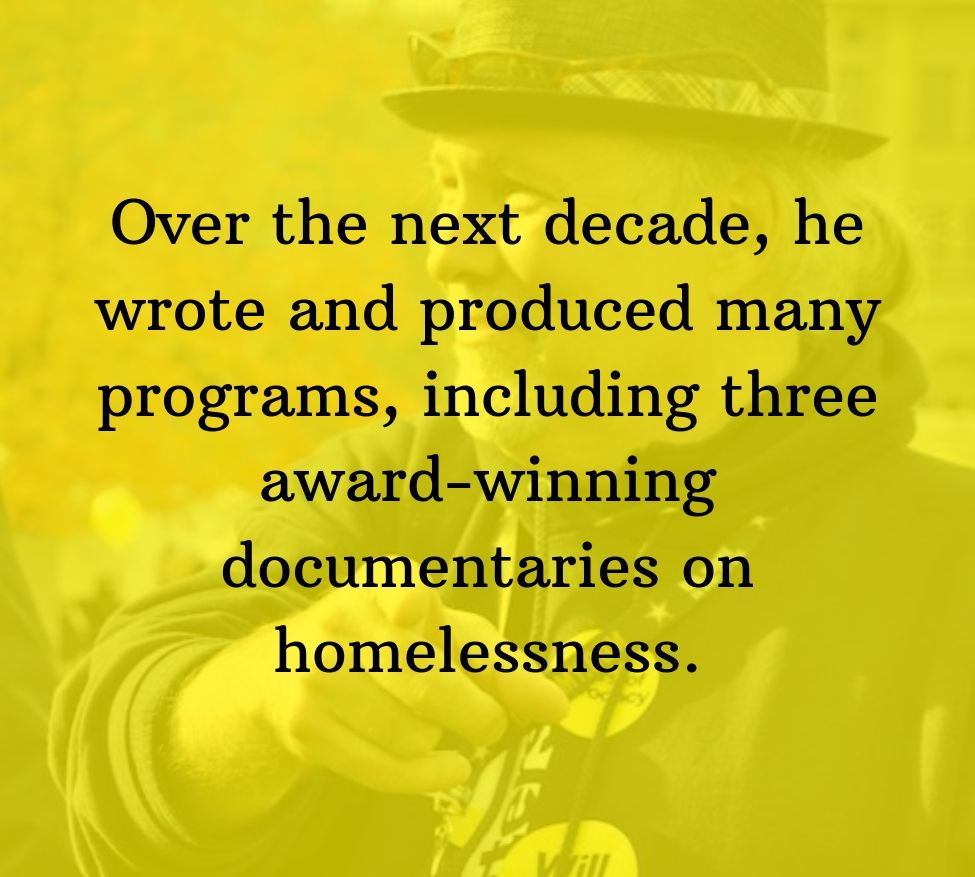 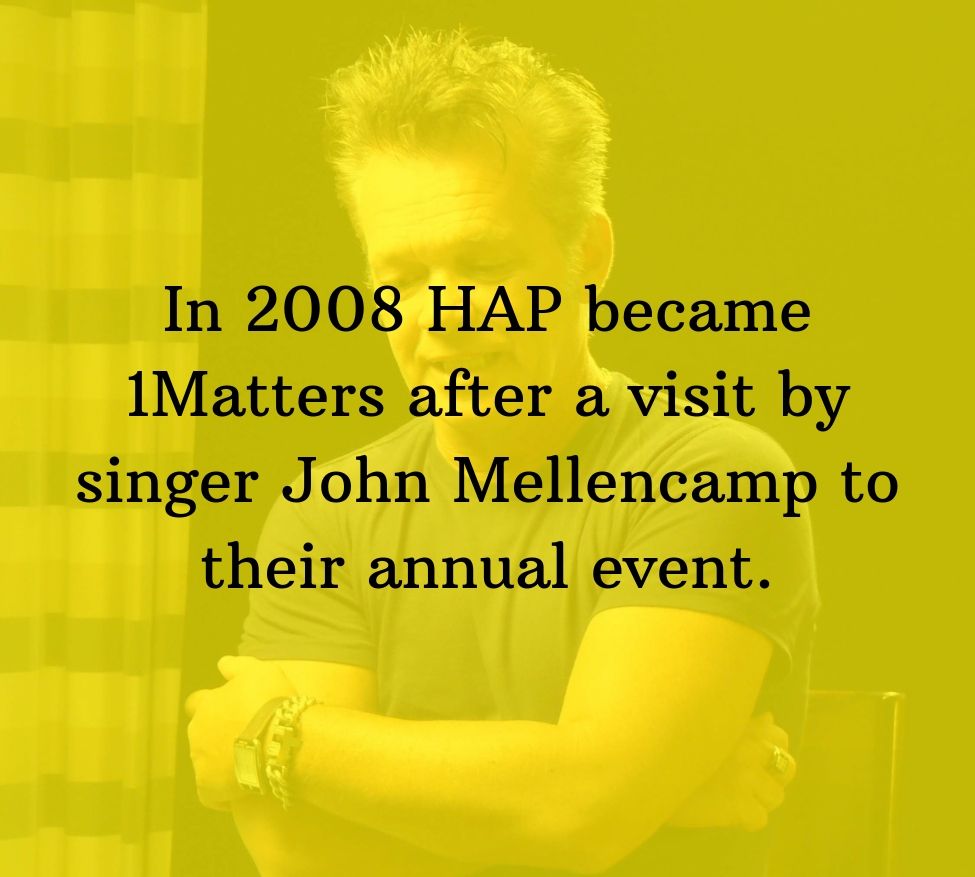 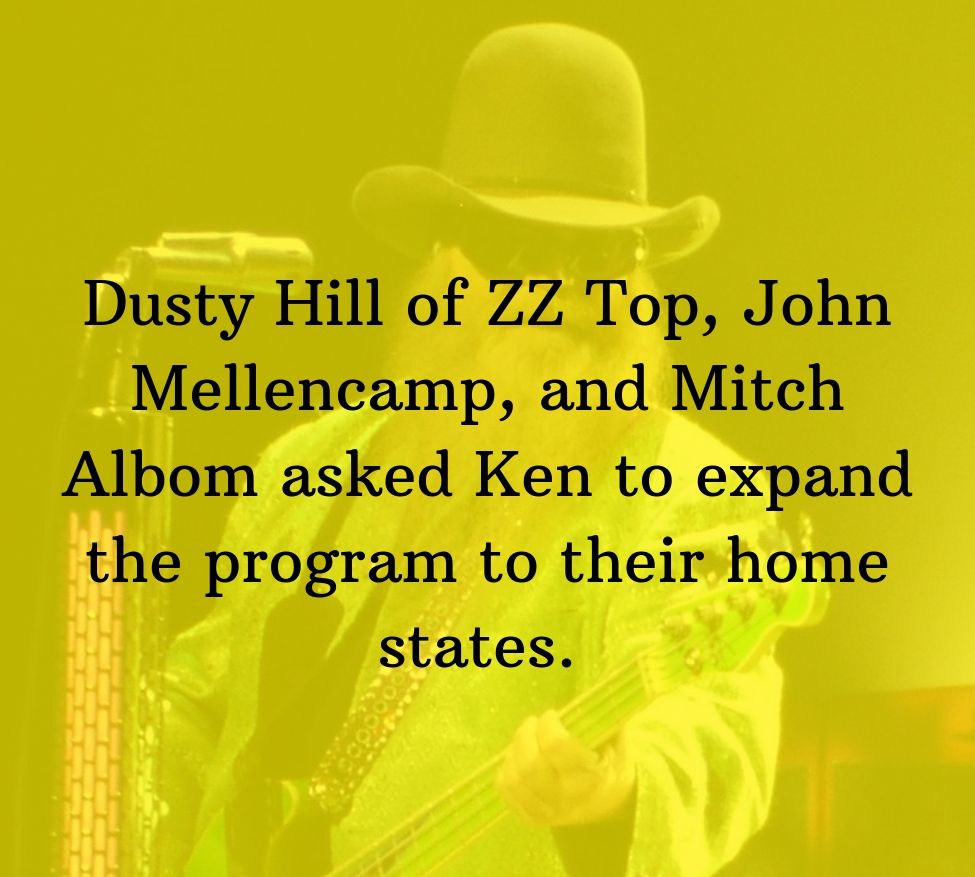 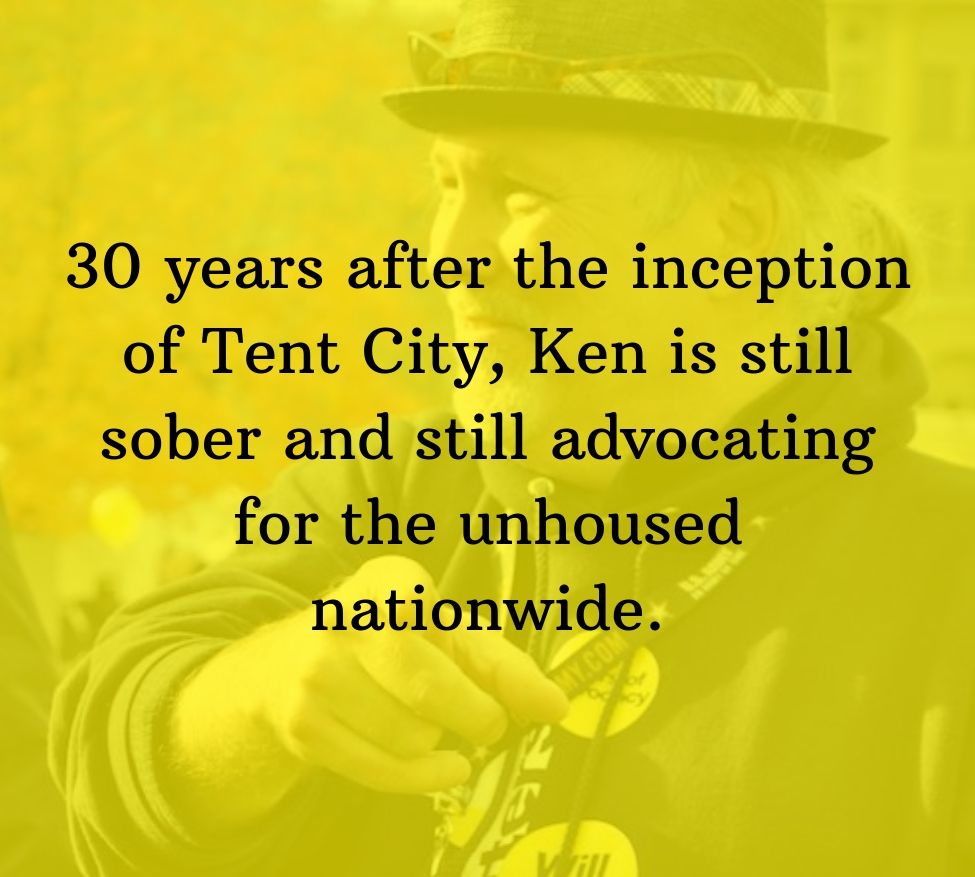 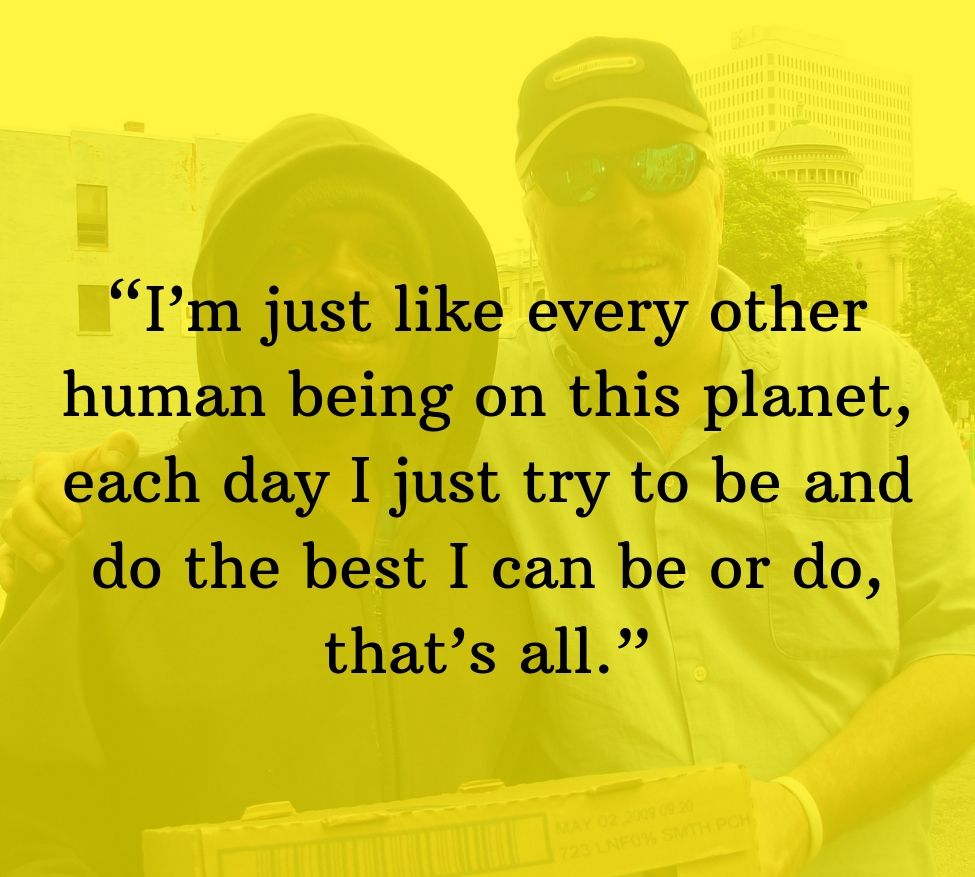